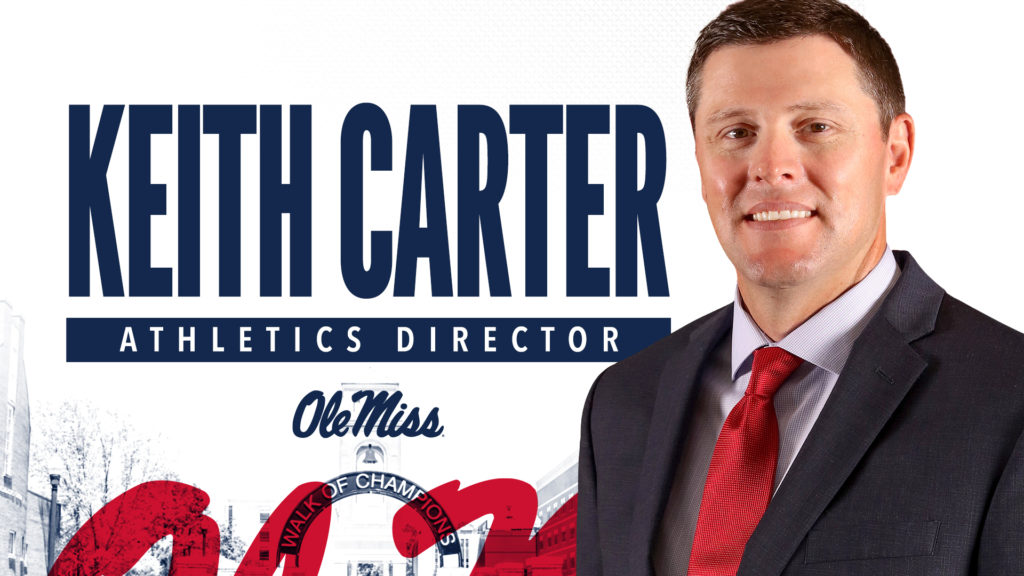 OXFORD, MS.  – University of Mississippi Chancellor Glenn Boyce introduced Keith Carter as the Vice Chancellor for Intercollegiate Athletics on Friday, following a national search. The Ole Miss Basketball All-American had served as the Deputy AD for Development and Resource Acquisition before being named the Interim Athletics Director in May.

Collegiate Sports Associates was honored to assist the University of Mississippi, Chancellor Boyce, and search committee chair Mike Glenn on the search.

Keith Carter is a nationally recognized fundraiser, being named 2016 NAADD Fundraiser of the Year, and has worked alongside Auburn’s Allen Greene, Texas A&M’s Ross Bjork, and UCF’s Danny White during his tenure at Ole Miss.

Chancellor Boyce: “This search was committed to finding the right leader who possesses the integrity and character needed to lead Ole Miss Athletics, a strong and proven record of success and excellent management and interpersonal skills. We were looking for someone who wants to be at Ole Miss, and who believes all of our programs can compete and win at every level. Keith Carter is absolutely the best person to lead Ole Miss Athletics to a new era of success.”

Search committee chair Mike Glenn: “The Chancellor’s charge to the committee was to hire the best Athletics Director for Ole Miss. After conducting an extensive search and interviewing a number of outstanding candidates, including sitting ADs from across the country, the committee made a unanimous decision to recommend Keith Carter. Keith’s extensive background in fundraising and athletics administration, combined with years of experience at Ole Miss, were important factors in the committee’s decision.”

Search committee advisor Archie Manning: “Keith Carter knows Ole Miss Athletics well after several years on Ross Bjork’s leadership team, and he is already held in high esteem by ADs around the SEC. In short, Keith Carter offers the complete package to enjoy a long and successful run, and I am thrilled about the future of Ole Miss Athletics under Keith’s leadership.”

Carter: “I want to thank Chancellor Boyce for his trust in me to lead this great athletics program forward. In my time as a student athlete and an administrator, I have experienced championship heights at Ole Miss, and I will work to provide the leadership and resources necessary for our teams to compete at that level year in and year out.”

A four-year starter at Ole Miss, Carter helped the Rebels to a pair of SEC Western Division titles in 1997 and 1998 and earned All-America honors after his senior season in 1999. The four-year starter received All-SEC first and second team honors in 1998 and 1999. He also won a gold medal as a member of the U.S. national team at the 1998 Goodwill Games. Carter played professional basketball in Italy from 2001 until 2008.

A native of Perryville, Arkansas, Carter lives in Oxford with his wife, Jill, and three children – Drew, Callie and Hayes.

For the full release from Ole Miss Athletics, click HERE.