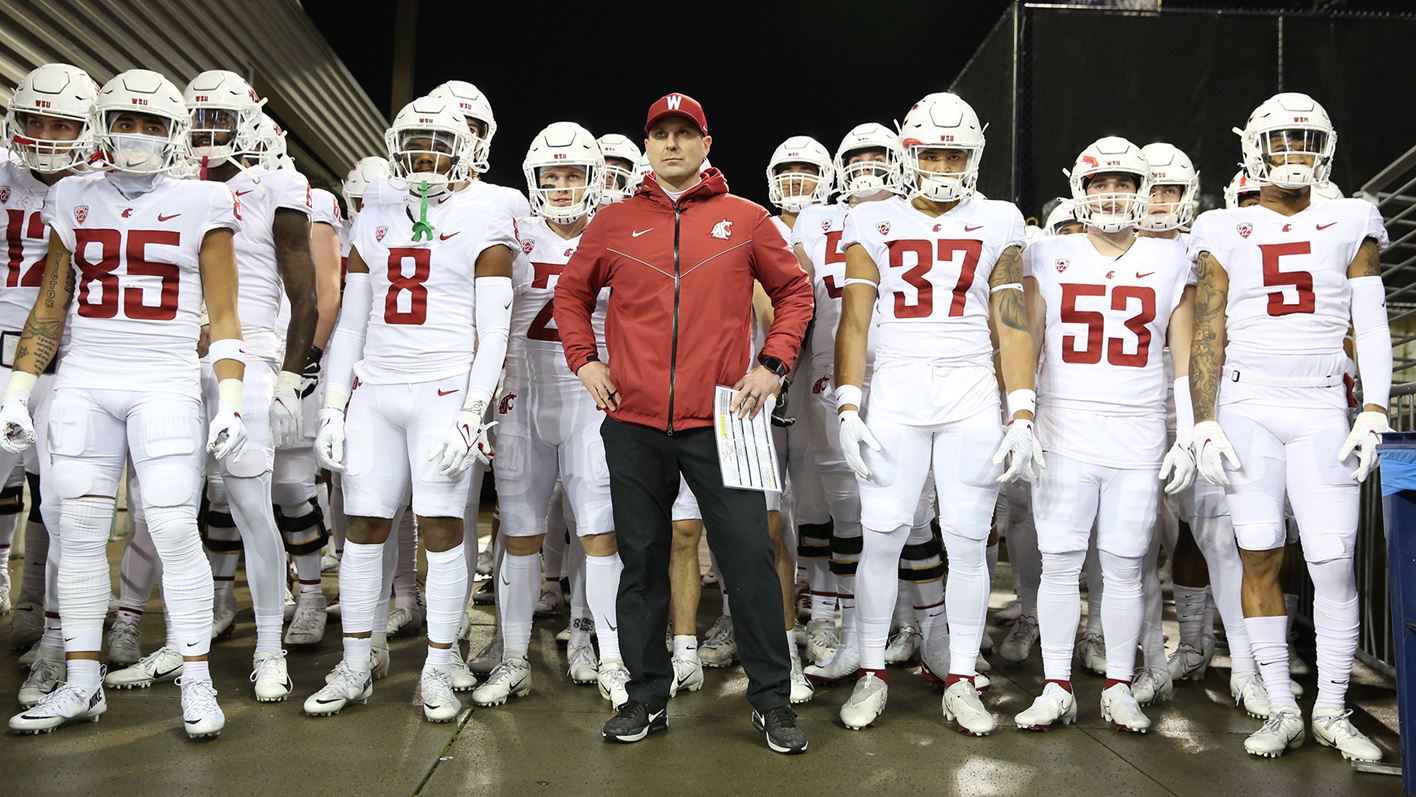 “We are thrilled to have Jake Dickert step into the head coaching role,” said WSU President Kirk Schulz. “Coach Dickert was able to bring together a team that has been through so much in the past two seasons and inspire them to not only keep going, but to fight harder. Coach Dickert loves Pullman, understands what it means to be a Coug, and most importantly, puts his players first. He is an asset to this program, and to WSU.”

I am extremely humbled and honored to be the next head coach at Washington State University. I want to thank President Schulz, Pat Chun and Bryan Blair for their leadership and trust in me and my vision for the future of WSU football. Pullman fits our family so well and we are so excited to be a part of this community for a long time to come. Go Cougs. 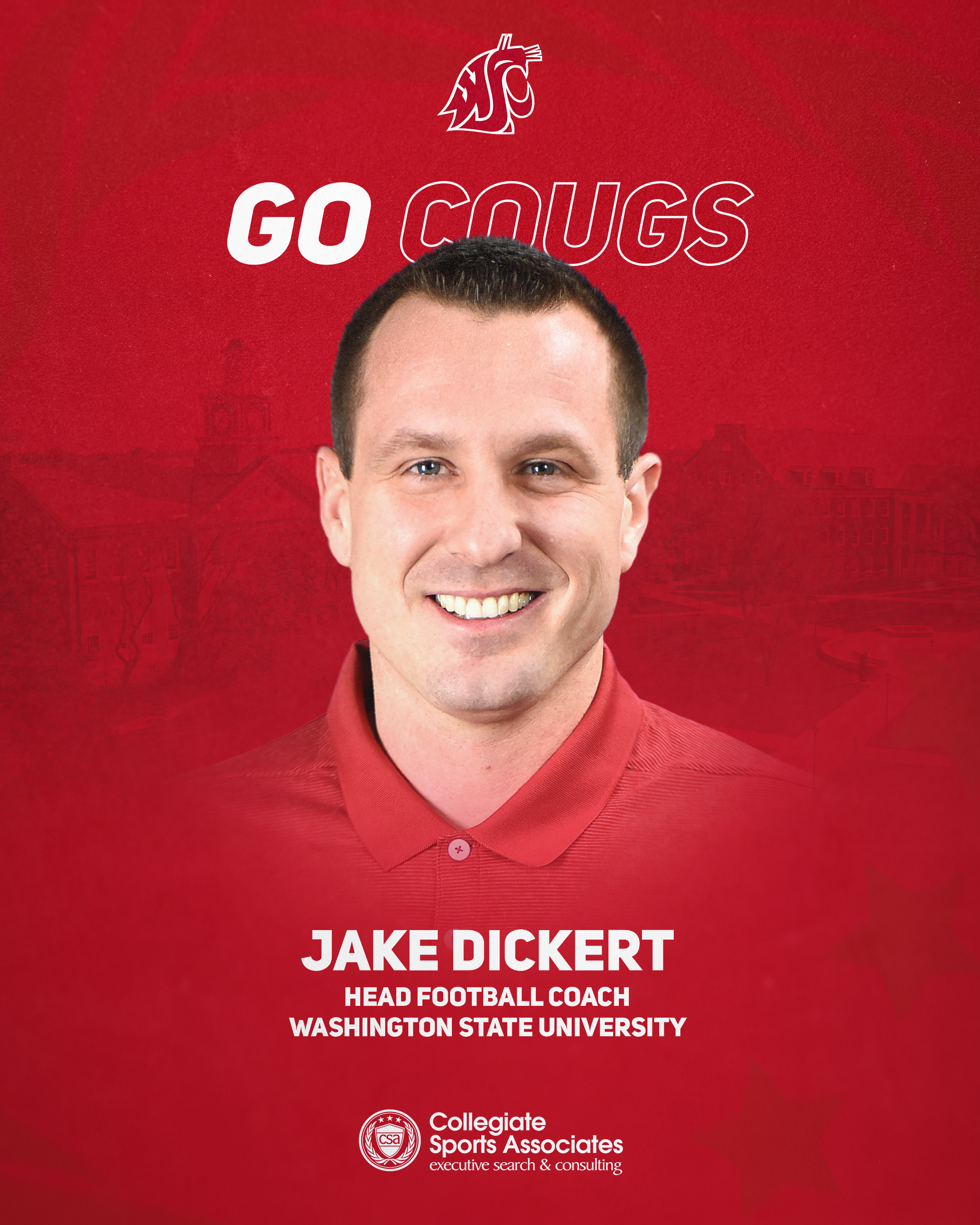 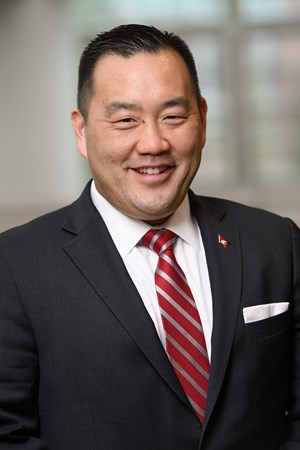 Coach Jake Dickert has proven to be an exceptional person, coach and leader. He has the character, vision and plan we need to lead Washington State Football through the next chapter of our storied history.  We’ve been able to witness the positive impact he has had on our student-athletes in a very short of period of time. We are thankful the best person to lead our program was already living in Pullman. We appreciate Jake, Candice, Rylee, Jett, and Jace for their commitment to WSU.

Dickert has spent the past six weeks serving as the Cougar’s interim coach, leading WSU to a 3-2 record with wins over Arizona State, Arizona and most recently, a dominating 40-13 Apple Cup victory in Seattle. The win snapped a seven-game skid to Washington and ended as WSU’s largest margin of victory in series history.

Dickert has spent the past six weeks serving as the Cougar’s interim coach, leading WSU to a 3-2 record with wins over Arizona State, Arizona and most recently, a dominating 40-13 Apple Cup victory in Seattle. The win snapped a seven-game skid to Washington and ended as WSU’s largest margin of victory in series history.

The Cougar defense has been a huge spark this season, leading the Pac-12 with 27 takeaways, which also ranks tied for third nationally, while also being second in the Pac-12 and tied for ninth nationally in turnover margin.

Entering the 2021 season, Dickert was in his second year as WSU’s defensive coordinator. In his first season in Pullman, the Washington State defense produced four All-Pac-12 Conference selections including linebacker Jahad Woods, who was second on the team with 31 tackles and led the team with 4.5 tackles-for loss. The Cougars led the league with eight forced fumbles and was fourth in rush defense (154.8), a 30-yard improvement from the previous season.

Dickert owns 14 years of collegiate coaching experience and arrived at WSU after working three seasons at the University of Wyoming (2017-19) including the 2019 campaign as the defensive coordinator while working with the linebackers and safeties.

Before arriving at Wyoming, Dickert spent the 2016 season as the safeties coach and co-special teams coordinator at South Dakota State. Earlier in his career, Dickert was a part of Craig Bohl’s coaching staff at North Dakota State from 2008-10. He joined the North Dakota State coaching staff in 2008 as a defensive graduate assistant on Bohl’s staff.  In 2009 and 2010, he was elevated to serve as safeties coach for the Bison.  The 2010 NDSU team advanced to the FCS National Quarterfinals. Dickert began his college coaching career in 2007 as a defensive graduate assistant at his alma mater, Wisconsin-Stevens Point.

He and his wife, Candice, have three children, daughter Rylee and sons Jett and Jace.

For the full release from Washington State Athletics, click HERE.