CSA is grateful to have assisted Gerald Harrison and Austin Peay Athletics on the search.

“Today, we welcome one of the most energetic and innovative young coaches in the country to lead our football team,” said Harrison. “In Coach Walden, we have found a man who is passionate about the student-athlete experience, energized about being part of the university and Clarksville-Montgomery County community, and excited to join us in our relentless pursuit of excellence.

“Scotty is a new-age CEO for a new era of college football. He is a tireless worker, a motivator, a dogged recruiter, and a person who possesses an infectious personality that will lead us back to the OVC Championship and beyond. I am thrilled to welcome Scotty, Callie, and Luca to the Austin Peay family, and I look forward to our opportunity to officially welcome them Monday.” 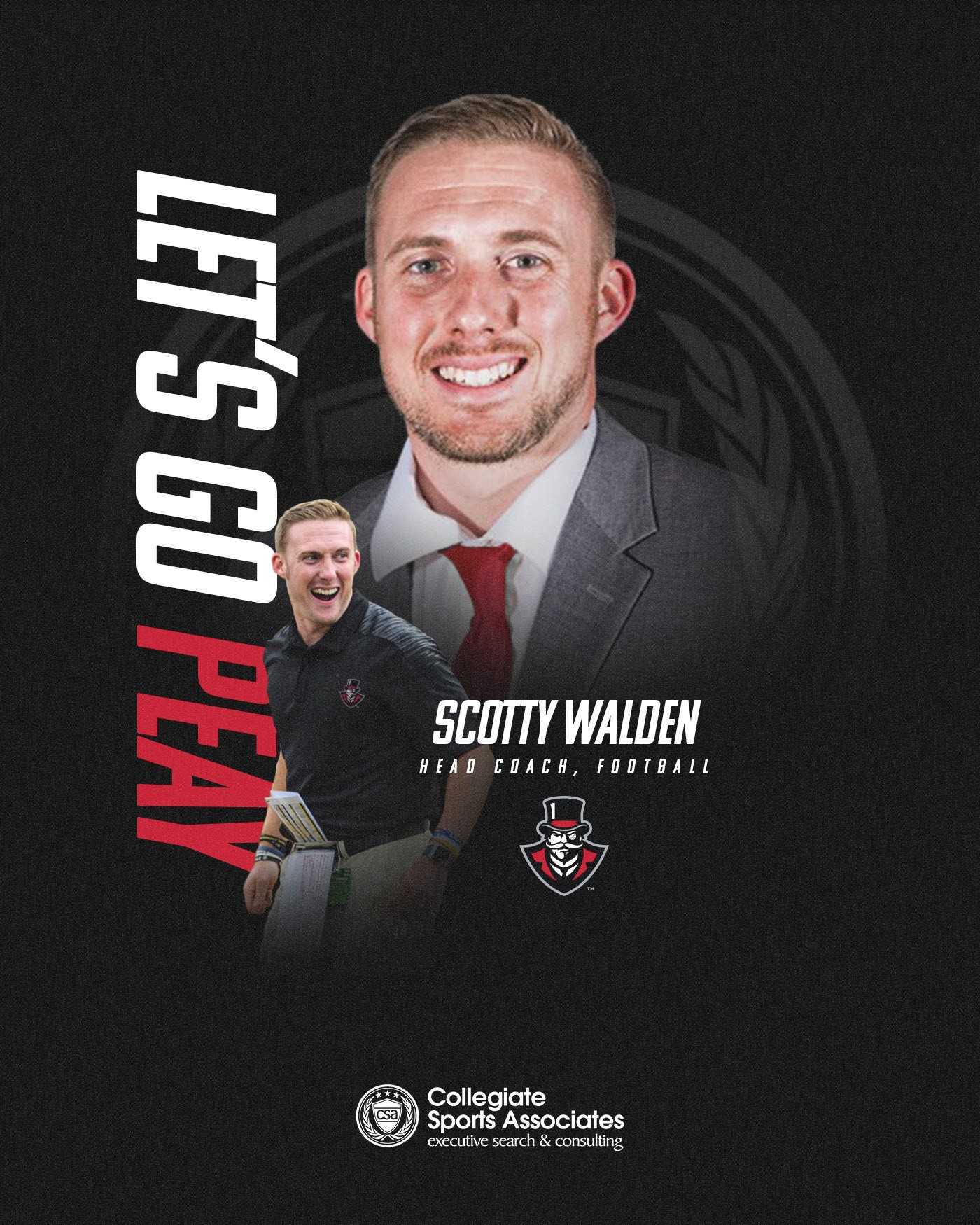 “Callie, Luca, and I are incredibly blessed and thankful to be a part of the Governor family,” said Walden. “Becoming the head football coach for an up-and-coming program like Austin Peay is a dream come true for myself and my family.

“I am looking forward to meeting the players and getting to work as soon as possible. We appreciate (Interim APSU President) Danelle Whiteside, (Director of Athletics) Gerald Harrison and the entire Austin Peay community for the amazing opportunity and belief in us. Let’s go do something special together!”

Southern Miss hired Walden as a wide receivers coach in 2017 before elevating him to co-offensive coordinator before the 2019 season. Over four seasons in Hattiesburg, he coached two standout receivers: Quez Watkins, a sixth-round pick by the Philadelphia Eagles in the 2020 NFL Draft, and Allenzae Staggers. In addition, USM played in the 2017 Walk-On’s Independence Bowl and the 2019 Lockheed Martin Armed Forces Bowl during his tenure.

Considered one of the youngest and brightest offensive minds in collegiate football, the American Football Coaches Association tabbed Walden as a Top 35 coach under 35 years of age in 2019.

Prior to his move to Southern Miss, Walden was the head coach at East Texas Baptist during the 2016 season.

An NCAA Division III product, Walden was the starting quarterback at Dordt College (2008) and Sul Ross State University (2011), sandwiching two seasons at Hardin-Simmons (2009-10). In his senior season (2011), he was the team captain and team Leadership award recipient. Walden was a two-time All-ASC academic winner and started his freshman season at Dordt College. During his two seasons at Hardin-Simmons (2009-10), he played as both a quarterback and defensive back.

For the full release from Austin Peay Athletics, click HERE.