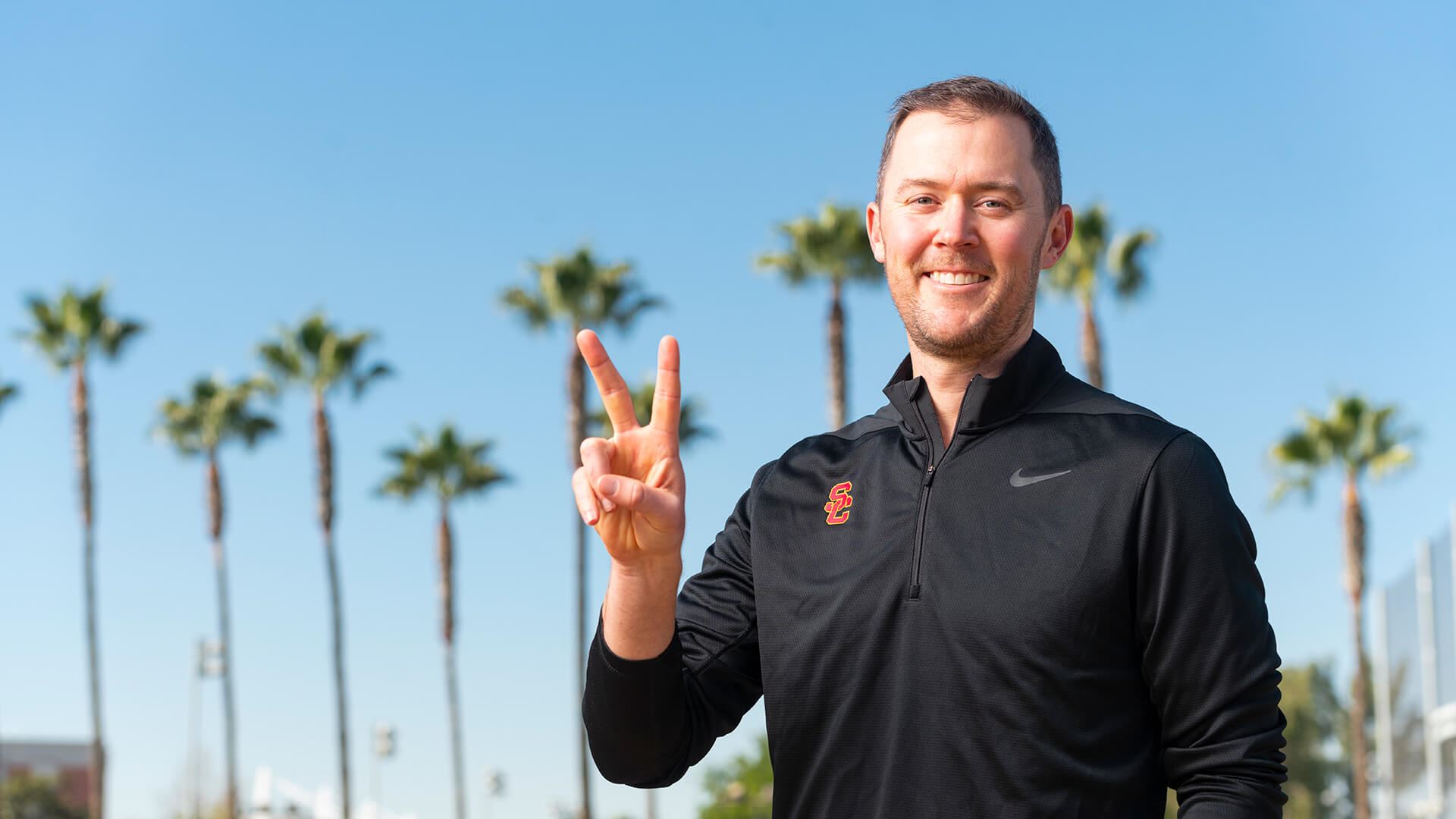 CSA is honored to have assisted Director of Athletics Mike Bohn and Executive Senior Associate Athletic Director at USC with this critical search.

Lincoln Riley is one of college football’s most successful young coaches who won 85 percent of his games in five seasons at Oklahoma and led the Sooners to four Big 12 titles and four New Year’s Six bowls with three College Football Playoff appearances.

“I am truly excited to come to USC and join the Trojan Family as its new head football coach.  USC has an unparalleled football tradition with tremendous resources and facilities, and the administration has made a deep commitment to winning.  I look forward to honoring that successful tradition and building on it.  The pieces are in place for us to build the program back to where it should be and the fans expect it to be.  We will work hard to develop a physical football team that is dominant on both lines of scrimmage, and has a dynamic balanced offense and a stout aggressive defense.” 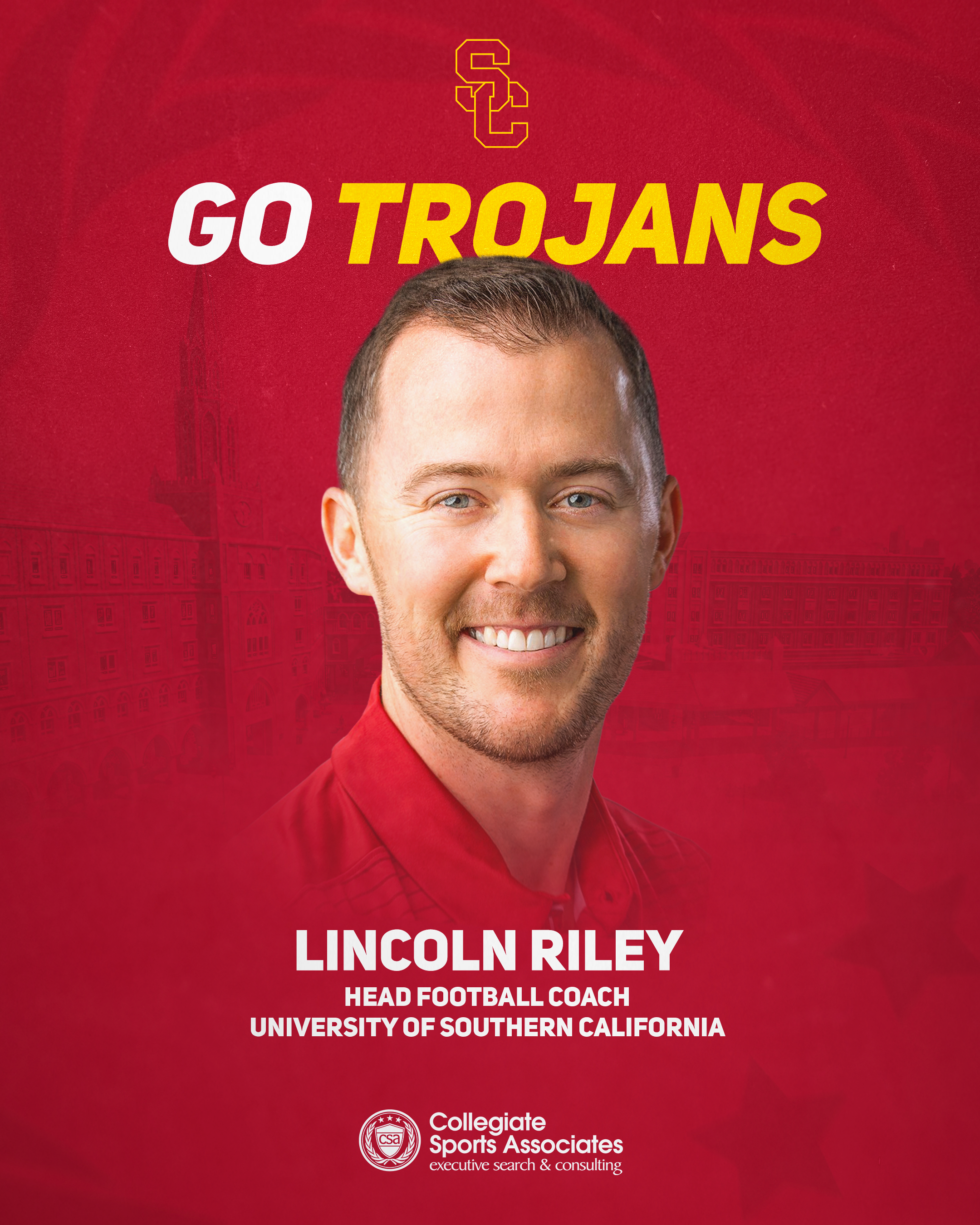 “We are ecstatic to announce Lincoln Riley as our new head coach and welcome his wife Caitlin and their daughters Sloan and Stella to the Trojan Family,” said Bohn. “Lincoln is the rarest combination of extraordinary person and elite football coach. His successes and offensive accolades as a head coach the past five years are astonishing. Lincoln will recruit relentlessly, develop his players on and off the field, and implement a strong culture in which the program will operate with the highest level of integrity and professionalism.

“Lincoln is universally considered one of the brightest and most talented football coaches in the nation, and the fact that he chose USC is a testament to the strength of our brand, the power of the Trojan Family, and the leadership of our university. This is for our current players, our former players, our alumni, our fans, and our entire university community. Our time is now.”

The 38-year-old Riley posted a 55-10 overall record in his five years (2017-21) at Oklahoma for an impressive .846 winning percentage.  His Sooners were 37-7 (.841) in league play and won Big 12 championships in his first four years there as he became the first person to win outright Football Bowl Subdivision conference crowns in each of his first four seasons as a collegiate head coach.  He set Oklahoma records for most victories in his first two (24), three (36) and four (45) seasons, breaking marks held by Barry Switzer and Bob Stoops.

After serving as the offensive coordinator and quarterbacks coach for two of the most prolific offenses in OU’s history, Riley took over as the Sooners’ head coach in 2017 when Stoops retired.  He was the youngest FBS head coach (33) at the time of his hiring.  He also coached the OU quarterbacks and called the offensive plays while serving as head coach, running a balanced offensive attack.

Riley led his initial Oklahoma squad to a 12-2 overall record in 2017, becoming just the fifth FBS coach with no previous head coaching experience at a four-year college to win at least 12 games in his debut season.  The Sooners won the Big 12 title by going 8-1, played in the CFP semifinal in the Rose Bowl and finished third in the final AP poll.  Quarterback Baker Mayfield won the Heisman Trophy that season, along with the Maxwell, Davey O’Brien, Manning, Walter Camp Player of the Year and AP Player of the Year Awards, and was the No. 1 pick of the 2018 NFL Draft.  Tight end Mark Andrews won the 2017 Mackey Award.

In the COVID-impacted 2020 season, Oklahoma went 9-2 overall, won the Big 12 at 6-2, beat Florida in the Cotton Bowl and was sixth in the final AP poll.

Riley spent 2015 and 2016 as Oklahoma’s offensive coordinator and quarterbacks coach.  He won the Broyles Award as the nation’s top assistant coach in 2015 when his offense ranked seventh nationally in total offense.  In 2016, receiver Dede Westbrook won the Biletnikoff Award and was fourth in the Heisman voting, while running back Joe Mixon set the OU season all-purpose yardage record (2,331 yards) and fellow running back Samaje Perine set the school career rushing mark (4,122 yards).

Riley came to Oklahoma after five seasons (2010-14) as the offensive coordinator and quarterbacks coach at East Carolina.  He added the title of assistant head coach in 2014.  The Pirates, running a spread offensive scheme, set more than 50 team and individual school offensive records during his time there.  His squads had the top five passing seasons in school history and top four total offense marks.  In 2014, ECU set a school season mark with 6,929 yards of total offense.  East Carolina appeared in the national Top 10 in such categories as passing and scoring offense, third down conversion percentage and red zone scoring efficiency.

His Pirate wide receivers Justin Hardy and Zay Jones became the most productive pass catchers in FBS history.  Hardy caught an NCAA record 387 career passes for 4,541 yards (including a trio of 1,000-yard seasons).  Jones, who Riley coached for the first two years of his career, went on to break Hardy’s mark with 399 career receptions.

East Carolina quarterback Dominique Davis was the 2010 Conference USA Newcomer of the Year and set school records for career completions and TD passes.  He completed an NCAA record 36 consecutive passes in 2011.  He was succeeded by Shane Carden, who broke many of Davis’ record.  Carden set ECU season marks for passing yards (4,736 in 2014) and completion percentage (.705 in 2013) and was the Conference USA MVP in 2013 followed by the American Conference’s Offensive Player of the Year in 2014.

Riley was on the football and track teams at Muleshoe (Tex.) High, a West Texas town of 5,000.  He was a walk-on quarterback at Texas Tech in the spring and summer of 2003 before starting his coaching career as a student assistant there under head coach Mike Leach for three seasons (2003-05), working with the offense.

He became an offensive graduate assistant at Texas Tech in 2006, then joined the Red Raiders’ fulltime staff as the wide receivers coach in 2007 and the inside wide receivers coach in 2008 and 2009.  In 2009, he called plays as the interim offensive coordinator in the Alamo Bowl, producing 579 yards of offense.  His wide receiver Michael Crabtree won the 2007 Biletnikoff Award while establishing Big 12 and NCAA freshman records with 134 receptions for 1,962 yards, while fellow wideout Danny Amendola also had a 100-catch, 1,000-yard season in 2007.  The Red Raiders played in a bowl in each of his seven seasons and Tech quarterbacks won NCAA passing titles in 2003, 2004, 2005 and 2007.

Riley received his bachelor’s degree in exercise and sports science from Texas Tech in 2006.

He was born on Sept. 5, 1983, in Lubbock, Tex.  He and his wife, Caitlin, have two daughters, Sloan and Stella.  His younger brother, Garrett, is the offensive coordinator at SMU after previously coaching at Appalachian State, Kansas, East Carolina and Augustana College and playing quarterback at Texas Tech and Stephen F. Austin

For the full release from USC Athletics, click HERE.